The first European to recognize the value of Aztec chocolate was Fernando Cortez – the Spanish conquistador known primarily as the conqueror of Mexico. Thanks to him, cocoa came to the Old World and won the hearts of Europeans.

The discovery of cocoa beans, however, is attributed to Christopher Columbus who was the first to bring a few cocoa beans back to Spain unaware of how the beans could be used. Yet, Cortez – during his travels had enjoyed the divine drink prepared with mashed cocoa beans, cinnamon, vanilla and chili – immediately recognized the value of chocolate. By pretending to be the god Quetzalcoatl – the King of the Toltecs – he reached the heart of the Aztec empire, where he was offered many gifts, including a cocoa plantation.

In this way, thanks to Cortez, chocolate found its way to the tables of the Spanish nobility. In 1580, the first chocolate factory was established in Spain. For over one hundred years, the art of making chocolate remained a secret of Spanish monks. Fortunately, the monks did not keep the secret forever and in the end chocolate made its way to European tables.

The Chest of Cortez 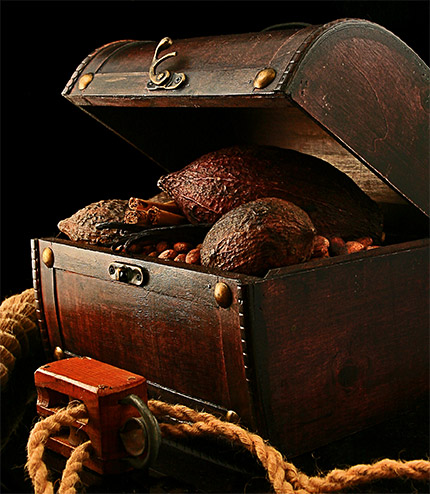